Over the past ten years, numerous people have asked for my guidance to get started selling on eBay. I made it a habit to ask them for their motivation to start an online retail business, and I was amazed by the misconceptions people had about the business of online sales.

Most of the times the answer I got to the above question was one of the following:

Moreover, selling myths are not only confined to the notion of “getting rich fast” but also include very pessimistic approaches such as:

So today, I’ll go over the flaws in all of the above statements and explain the reality behind these myths.

Wow, this one cannot be further from the truth! I realize that I don’t represent everyone who sells online, but it took me about 3 years of hard work and dedication to start seeing the fruits of my labor.

Moreover, for every success story, there are 100 failures no one hears about. Many of my friends tried to start an online business after seeing my success, all of them are bright and talented people, and all of them quit after several months of trying.

Just like in any other profession, you have to put in the hours to get better at your trade and have enough grit to persevere the early bumps.

Being an entrepreneur is hard, and starting an eCommerce business is in no way, shape, or form any easier than a tech startup or a grocery store, even though in people’s conception it may be the case.

Ben Horowitz, an entrepreneur who sold his company to Hewlett-Packard for $1.6 billion in cash, wrote a great book (titled The Hard Thing About Hard Things: Building a Business When There Are No Easy Answers) that explains how hard it is building a business and there is one sentence I love to quote from this book:

“As a startup CEO I slept like a baby. I woke up every 2 hours and cried.’’

Myth #8: I must sell online, it’s the most popular type of commerce

eCommerce has risen in the past 20 years to become a popular type of buying/selling.

The number of people in the United States who purchased online at least once in 2018 was over 220 million.

But, it is still VERY SMALL compared to total offline retail: 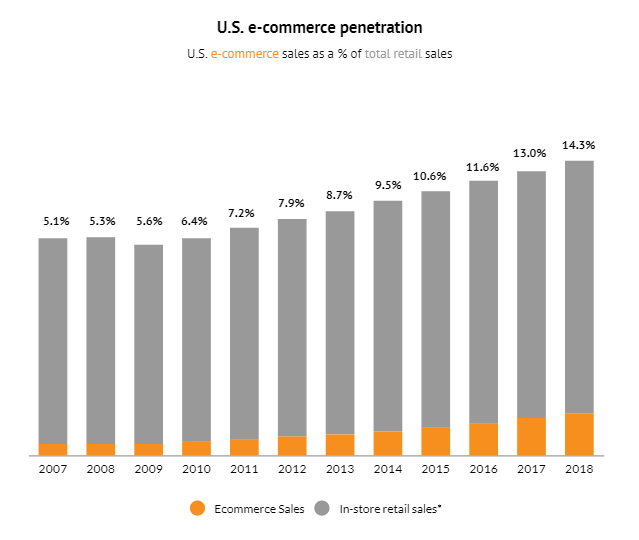 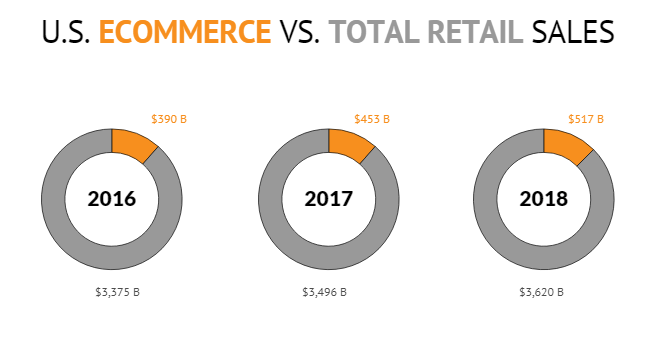 Myth #7: I must offer the lowest prices to succeed

In the very early days all I wanted is to generate sales, and I thought that the easiest way to do this was by lowering my price below the competition. I did that, and then did it some more, and more, until I wasn’t making any profit. I was making revenue, but no profits. In fact, I was losing money on every transaction (because of the overhead costs, more on that later). Very quickly I realized that competing on price is just a dumb idea, and I must think hard about other ways of convincing a potential customer to give his money to me instead of to my competition.

This is the whole idea behind differentiation techniques, and every business must have one in order to set themselves apart from the hundreds of competing businesses.

In my case, I studied the different aspects of online buyer’s psychology and realized that by creating professional looking eBay listings I’ll have a bigger chance of grabbing the buyer’s attention and trust.

According to a study conducted by KPMG that analyzed the online shopping preferences and behaviors of more than 18,000 consumers in 51 countries, when asked what is most important when deciding where to buy an item online, consumers were most likely to buy from the website with the lowest price they could find (57 percent) followed by websites with enhanced delivery options (43 percent) or easy return policies (40 percent).

So, only 57% care most about price, and that was back in 2017 so I would imagine the number went down since then.

Myth #6: eBay is not relevant anymore

The first channel I sold on was eBay, it was more than 10 years ago and eBay was the premier marketplace.

Many things have changed since Amazon rose quickly to become the #1 marketplace with almost 50 percent of the U.S. e-commerce market.

But, eBay is still a very relevant marketplace, it is not #1, but being #2 in this huge space is something you must consider if you want to sell online.

With 179 million buyers who spend $95 billion, you can’t afford not considering eBay as a sales channel.

So you think that you can sit at home in your pajamas and sell online without paying any overhead? Well, you can, but you’d still have some basic expenses such as selling fees, payment processing fees, accounting fees, annual tax report fees.

All those fees add up to numbers you must take into account if you want to build a profitable business.

Not taking into account all types of overhead will lead you to calculate the wrong profit margin and selling your products too cheap only to lose money at the end of the day.

I highly recommend reading this article about all the expenses to consider whether you work from home or the office, to understand how to calculate your real profit and how to price your products in order to make money.

Myth #4: It is easy to scale the business to become multi-channel

When you start an eCommerce business you may find yourself thinking that if only you expand your inventory to more sales channels you could easily double your sales. In theory, that is the right mindset, the problem is with execution.

While starting your online sales from a well-known marketplace like eBay or Amazon is the preferred way thanks to the initial traffic they bring to your listings (versus opening a webstore and spending money just to bring traffic to your unknown store), it is much harder to duplicate your listings to another marketplace. As much as eCommerce tools that help sellers manage their online business evolved, there is still no software that makes the process of expanding to a new channel seamless (even CrazyLister is not there yet although duplicating between multiple eBay accounts is a breeze).

As of today, you are required to do A LOT of manual work to take your inventory from one marketplace and upload it to another.

Myth #3: It’s Impossible to Compete with Chinese Sellers on eBay

Although it seems like every product you look for can be purchased from a Chinese seller at a lower price, this is not the case for all products.

Moreover, as I mentioned before, price is not the only thing people care about.

I’ve been selling at prices 20-30% higher than our direct Chinese competitors, who are selling exactly the same products, and I outsold them most of the time.

The key was to compete on other important factors:

I was much better at customer service, I’m a better communicator, and I understand Western customers much better. I took responsibility for everything, whether it’s my fault or not. That’s not so common in Chinese business culture.

One important notion: quality of life in China improves rapidly, which leads Chinese to consume more products, which exposes them to western brands, which opens an opportunity for western sellers to tap into the huge Chinese consumer market. 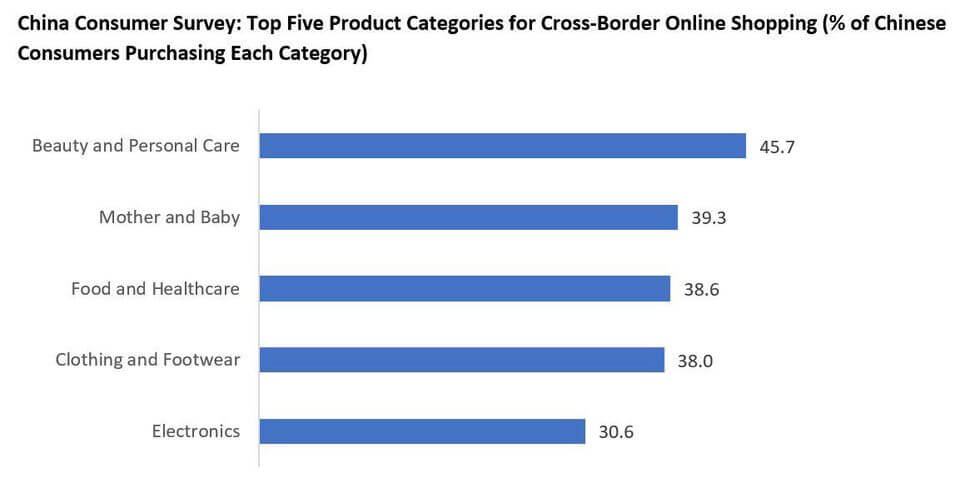 You may profit much more from developing a sales channel in China than fighting with Chinese sellers on eBay for the western consumer.

Myth #2: Amazon is too big to compete with

Amazon is one of the most valuable companies in the world, and it is also one of the most talked about companies thanks to its many initiatives in the eCommerce space (opening stores, drone delivery). I can understand how all of this may seem overwhelming to a small online seller, but all of this is not relevant to competing with Amazon. Some of Amazon’s initiatives are geared towards helping its third-party sellers and it clearly works as a third-party business (you, the sellers) grew significantly over the years.

This myth is related to the first one I mentioned, it is hard enough to build a business you can profit from (most people fail, get into debt and spend years returning it), imagine how hard you’ll have to work and how much money you’ll have to earn in return in order to be able and hire people you can trust to run the business for you so you won’t have to show up to work every day.

An online business is like most conventional types of businesses, they require people to operate them (uploading products, providing customer support, dealing with suppliers, handling returns, accounting etc.).

An eCommerce business is NOT a passive income type of business!

In order to have any chance of earning money without being involved 24/7, you first have to build a stable and profitable business. Then you have to have enough profit margin to hire reliable employees that would be able to grow the business further and over time you may be able to delegate enough tasks so you won’t work as much. This process takes time, and most people aren’t able to achieve it.

As an aspiring business entrepreneur you have to develop your own critical thinking, don’t take statements that can have a huge impact on your decisions as granted. Take the time to explore every business decision in depth, consult with people who’ve been in your situation and only then decide how to proceed.

It is hard enough to start and grow your own eCommerce business, don’t let made-up myths distract you from choosing the right path.